Adults – In the adult state they are small black beetles about 6 to 10 mm (1/4″ to 3/8″) long, depending on the particular species. They are very mobile and can move great distances, though at times they will stay in one area and feed. Their cycle begins in late spring when they emerge as adults from the ground where they have overwintered as adults or matured from larvae. Since they are nocturnal, they feed at night, and being cold blooded they do not feed until the night temperatures are sufficiently warm. After emerging they feed for two weeks to a month before beginning to lay eggs. At this time they almost become egg laying machines as they wander through your garden, and your neighbors’ gardens, laying eggs in the leaves and mulch under the plants.All adults are female and parthogenetic meaning that a male is not necessary for reproduction. The adults eat small notches in the edges of the leaves which may disfigure the plant, but will not kill it. They are a problem to control, since most control methods aim at putting a stomach poison on the leaves which the adults must eat. But before they eat they may lay eggs under the plant (or another plant that they didn’t eat on), which eventually hatch and continue the life cycle of the insect. 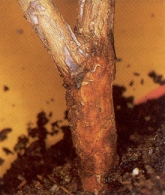 Larvae – The eggs that were laid under the plant hatch and become white larvae up to 6 mm (1/4″) long. This stage is where the most damage is done to the plant, and it is impossible to see that damage is happening until it is too late. The larvae eat the roots and often girdle the stem, eating the bark and essential cambium layer on the stem of the plant just at or below ground level, making it impossible for the plant to feed its top. These larvae eventually become pupae, which are soft and white and look much like the adult. Before long these pupae become adults and the cycle is started again. Two or three generations a year are possible.

Control – For the home gardener the most often used control is Orthene which should be sprayed on the foliage at about three week intervals from about May to October, depending on the weather. This is done to control the adults but is not fully effective because the weevil may lay eggs under the plant before they eat the foliage that has been sprayed. Better control was possible with long lived chemicals which could be placed in the soil under the plant, preventing the eggs from hatching, hut these chemicals are no longer available for environmental reasons. There is a biological control in the form of a nematode which can be applied in the fall to control the larvae. While this approach 1s promising, it has limitations in that the beneficial nematodes are very sensitive to temperature and moisture extremes and will not live over winter. If applied to soil that is too cold, too wet, too dry or too hot, they will die and provide no control. Best control is achieved by using both chemical and nematode methods with proper timing. 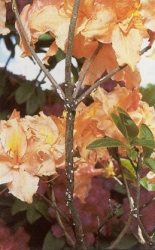 2. Aphids – These small sucking insects feed on the new growth as it begins to expand causing distorted leaf shapes. To control, use Orthene, Malathion or Diazinon.

3. Bark Scale – Small sucking insects feed on the bark and exude a sticky substance that turns the stems black. To control, use Orthene.

4. Caterpillars, Leaf rollers, Sawflies (moth larvae) – The larvae of several species of insects are involved. Damage is the result of chewing on the new foliage. These pests hatch as the new growth is forming, and often eat out large areas of the soft growth. They may also roll the leaf with a white web. Damage only occurs on soft growth. To control, use Orthene, Malathion, or Diazinon.

5. Leaf Miner – This tiny caterpillar ‘mines’ through the leaf, and leaves a line wherever it goes. Leaf tissue below the line will often turn light green. There is an azalea leaf miner which creates larger, brown, blister-like mines in and skeletonization of the leaf. To control, use Orthene, although by the time you see the damage, the insect is often gone. 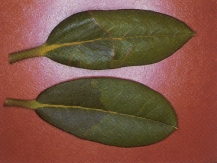 6. Spider Mites – Very tiny reddish eight legged mites suck on the bottom of the leaf, causing the top of the leaf to turn to a mottled brown-green color. To control, use Malathion.

7. Lacebugs (Lacewing) – A small insect with transparent, lacy wings sucks on the bottom of the leaf, causing the top to take on a mottled grayish-brown appearance. The underside of the leaf will show a brownish residue exuded by the insect. To control, use Malathion or Orthene.

8. White Fly – A small white flying insect, that looks like an aphid with wings, sucks on the underside of foliage, leaving white spots where it has been. To control use Malathtion, Diazinon or Orthene.

9. Slugs and Snails – These pests feed on soft new growth and on flowers. To control, use Metaldehyde baits or sprays.